New study on the impacts of wildfire emissions on fine particle air pollution in the western US until the end of the 21st century, under different climate change scenarios.
This work highlights the fact that when committing to a particular level of future warming, we are also committing to a particular level of fine particle air pollution. This has to be taken into account when considering mitigation and adaptation strategies. 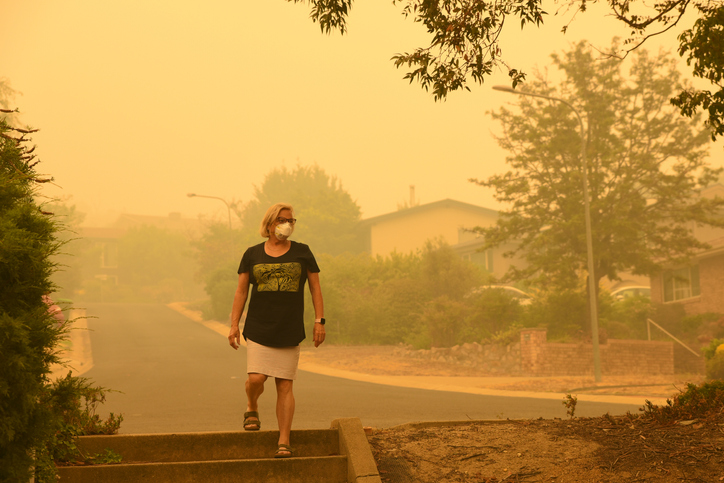 Fine particulate matter (PM2.5) are particles with a size of 2.5 microns or less. Due to their very small size, they can bypass many of our body’s defences, travel deeply into the respiratory tract and eventually enter our bloodstream, which makes them particularly dangerous for human health. Severe episodes of air pollution caused by emissions of these small particles can also have important implications for climate and ecosystems1,2,3,4.

Today, wildfires contribute to 15-30% of atmospheric primary PM2.5 emissions in the United States”5. During the 21st century, a warmer climate is projected to enhance wildfire activity over the western US6,7,8,9,10. However, few studies have yet estimated the future fire emissions of PM2.5, and thus projections of future air quality usually neglect the impacts of changing fires.

This new study, supported by the National Oceanic and Atmospheric Administration (NOAA) and ESM2025 EU-funded project, applies a new empirical statistical model to future wildfire projections provided by three Earth system models to simulate the impacts of fire emissions on future air pollution in the western US.

Future climate projections for western North America, under a scenario based on a fossil-fuelled development with high emissions of greenhouse gases, estimate a lengthening of the fire season, as well as a 7.5ºC warming during late summer to fall when annual fire emissions peak. This warming would lead to an enhancement of evaporative demand and water use by vegetation, with soil moisture decreasing by ~10%. Simultaneously, atmospheric CO2 fertilisation, temperature and land use change would drive a ~50% increase of vegetation carbon mass. Both a drier soil and increased vegetation mass are favourable conditions for fires.

According to this study, by the end of the 21st century, these climatic impact drivers along with socioeconomic factors (such as population growth and density), would lead to a 110-250% increase in CO2 emissions from fires, with fire burned area expanding by 50-120%, depending on the climate change scenario and model considered.

Xie and co-workers developed a multiple linear regression model (or an empirical statistical model) to predict future PM2.5 levels from fire CO2 emissions and meteorology results provided by three CMIP6 Earth System models. They based their work on historical observations, the link between the interannual variability of PM2.5 means and extremes at US surface sites and regional versus local fires, and meteorological conditions.

With their new approach, the team found that the future increase in CO2 emissions from fires and changes in meteorology due to climate change may lead to a doubling or tripling of mean fine particle levels over the US Pacific Northwest during late-summer to fall, with unhealthy daily levels of 55-150 µg/m3 possibly becoming the new norm.

Under the high emissions scenario, models predict that 72-96% of Pacific Northwest sites will experience daily PM2.5 extremes above the 35 µg/m3 US national standard, with 52-68% of the sites exceeding the unhealthy level of 55 µg/m3 by 2080-2100. Even for the intermediate emissions scenario, US national standard levels are expected to be exceeded already by mid-century.

Between 2017 and 2021, four severe fire years over the western US caused historical fine particle pollution extremes, raising “the possibility that climate change is already driving strong changes in fire regimes”. This study suggests that, even under a climate change scenario considering intermediate emissions, fine particle air pollution extremes may occur every 5 years by the end of the 21st century, with strong implications for public health.

This work highlights the fact that when committing to a particular level of future warming, we are also committing to a particular level of fine particle air pollution. Less gloomily, the large spread in fine particle pollution across climate change scenarios also emphasises the co-benefits of climate change mitigation in reducing wildfire activity and air pollution.

Significant efforts and cooperation between stakeholders on multiple fields, including climate mitigation, regional air quality and forest management, are paramount to adapt to and to minimise potential adverse health impacts related to fine particle air pollution, as well as to tackle future wildfire-related challenges. 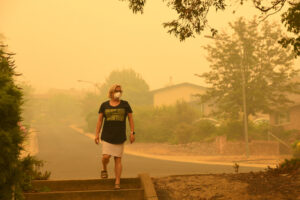 We are an ambitious European project on Earth System Modelling that aims to develop the next generation of Earth System Models (ESMs). By developing a novel generation of ESMs, we take a step forward in providing relevant climate simulations for the design of comprehensive climate change mitigation and adaptation strategies, in line with the Paris Agreement. This next generation of ESMs will include an improved representation of the full Earth-system response to anthropogenic emissions, with a particular focus on human land-use change.